by Cyn Mackley
in Economy

One year ago, the Portsmouth Bypass opened to traffic.

The $634 million, 16-mile, four-lane, connects U.S. 52 at Sciotoville to U.S. 23 near Lucasville bypassing the need for highway traffic to come through Portsmouth. Locals call it the Portsmouth Bypass.

Some predicted the project would lead to an economic boom, others thought it would spell doom for the Portsmouth economy? Who was right? The Scioto County Commissioners reflected on the project’s impact at their last meeting of 2019, and they are feeling positive about the year to come.

Commissioner Cathy Coleman says, “I feel very good about it. It’s like the movie Field of Dreams. If you build it, they will come.” 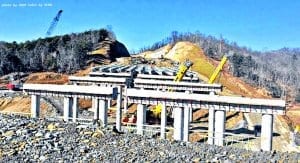 Commissioner Bryan Davis agrees, saying that investors are picking up property in Portsmouth now, after sitting back to see what would happen with traffic through the city. “I don’t know about you, but I think Portsmouth is more congested than it was before.” The key difference is that the traffic doesn’t include big rigs on city streets. “That was the key benefit of building the highway. Getting big trucks off Portsmouth Streets and making it safer for pedestrians.”

Davis said he’d like to sit down with local business owners to find out what, if any, changes they’ve seen in their year-to-year income.

On the whole, Commissioners feel the needle is moving in the right direction. Development in Lucasville and Minford are on the uptick with more on the horizon.

The opening of the Portsmouth Bypass brought out thousands of visitors and curious onlookers. You can see our coverage along with other videos of the opening day ceremonies in our SCDN TV: Local Interest section.